Motorsport is incredibly exciting. Whether it’s the thrill of competitive circuit racing in Formula One, the raucous roar and desire for speed in drag racing, or the battle against the clock in rallying, motorsport speaks to the thrill-seeker in everyone. We’ve recently teamed up with rally driver, Ashleigh Morris, in a sponsorship deal for the final races of this season, which has also allowed us to capture the noise levels from the driver’s seat.

During the rally at Donnington Park circuit on 3rd March 2019, Ashleigh and navigator Jamie each wore a doseBadge5 noise dosimeter, allowing us to get accurate noise readings from inside the cockpit over a fifteen-minute period. Quite unsurprisingly, the results of our analysis show that the interior of a competitive rally car can be quite a loud place. However, when we downloaded the data, we were astonished by just how loud it actually was. 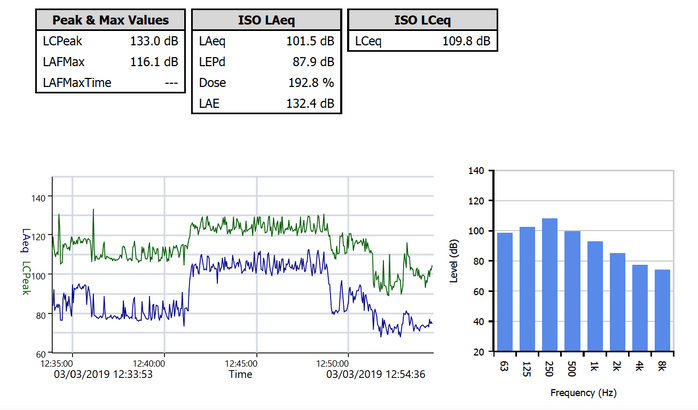 The graph to the left shows the overall measurement values during the 15-minute recording period. The C-weighted peak measured 133 decibels, which actually falls below the lower occupational noise exposure limit of 135 decibels. However, the LAeq (average noise level) was 101.5 decibels, meaning that in any working environment, hearing protection must be worn. Thankfully, crash helmets offer enough protection without the need for additional ear defenders or earplugs to be worn. With that being said, it would be advisable to also wear earplugs, just in case the insulation from a crash helmet doesn’t quite do the job.

On the day we measured Ashleigh and her navigator, she finished 5th in class from 13 starters and 34th overall, which given the challenging conditions she faced out on the track, was a brilliant achievement.

Ashleigh is currently sitting 20th overall in the championship and third in her class (B), which is impressive by anybody’s standards.

With only one more rally to go before the end of the reason, everyone at Cirrus Research is cheering Ashleigh on, and hopefully, she’ll be able to build on her already-successful year.