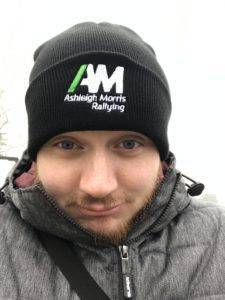 It was incredibly cold, so I made sure to wrap up warm with the help of my Ashleigh Morris Rallying hat!

Sunday 7th April 2019 marked two important events: one being the end of this season’s MSV Circuit Rally Championship, the second being my very first experience of live motorsport. A couple of months ago, Cirrus Research entered into a technical marketing partnership with driver Ashleigh Morris, a rising star in the world of rallying. The deal we agreed with her saw our logo emblazoned across her fearsome Ford Fiesta R200, and the opportunity for some of the Cirrus team to attend the final three events of the season at Donington Park, Angelsey and Cadwell Park. I took advantage of this opportunity and joined my colleagues at Cadwell Park for what turned out to be an epiphany.

I like cars and I like driving. I appreciate pretty cars and I appreciate fast cars. Personally, I don’t drive anything flash (a Citroen DS4 to be exact) and the most involvement I’ve ever had with motorsport is from the comfort of my sofa with a game controller in my hands. However, after my experience of the circuit rally at Cadwell Park and all the work we’ve done with Ashleigh Morris over the last few weeks, I have to say I think I’m a motorsport convert.

But you’re not here to read my rant about how I’m now a rally fan – you want to know about the event at Cadwell and more importantly, about Ashleigh.

The conditions at Cadwell were particularly tough on Sunday – it was cold, damp and misty and no matter what, I could not keep warm. I’m told on good authority that these conditions created issues for the cars too.

Stage One – Full wets and a suspected puncture

The track was particularly damp at the beginning of the day so Ashleigh and her co-driver, Jamie, began with intermediate tyres on the front and full wets on the rear, to try and get the best out of the difficult conditions out on the track; with the Fiesta being a front wheel drive car, it’s often difficult to get enough heat into the rear tyres.

The first stage began early with the Class A cars leading the way on the track, led by Andrew Egger and Alan Jackson in an incredibly nippy Vauxhall Nova. Ashleigh and Jamie entered the track with the rest of the Class B vehicles, hoping to build on the success of their season up to that point, which saw them sitting second in their class. The nimble Fiesta weaved its way through the tight and twisty first stage only to lose a minute of time thanks to what was thought to be a puncture. One of the cars had knocked down a direction post creating an obstruction in the road, which Ashleigh was forced to drive over. The scraping noises coming from the wheels caused her to pull over, but thankfully there wasn’t any critical damage caused.

A confident and competent performance in stages two, three and four left us, Ashleigh, Jamie and her Cirrus entourage feeling incredibly confident of a good result on the day.

An eager Escort and soggy spectators

Stage four of the rally brought some unexpected action, as Ashleigh was passed by a rather eager Ford Escort MKII. There’s nothing strange or unusual about rally cars passing each other on the track, but what followed was certainly exciting for those spectating, and perhaps a little hair-raising for those involved. After the Escort has sneaked its way past Ashleigh’s ferocious Fiesta, it had clearly overcooked the manoeuvre, causing it to spin off the track and onto the infield. Luckily for you, the event has been immortalised forever thanks to this thrilling in-car footage.

By the time stage five arrived the track had dried out, which was more than could be said for me or the Group Marketing Manager, Tony. But in true plucky-Brit style, we kept calm, carried on and wore a beaming smile on our faces, even though deep down we were screaming out for some respite from the onslaught of the cold and damp weather. Ashleigh and Jamie, on the other hand, were getting on with the important task at hand; they swapped out their tyre setup for intermediates on the rear and softs on the front. This resulted in far better handling for the car and helped Ashleigh set an impressively quick time for stage five. 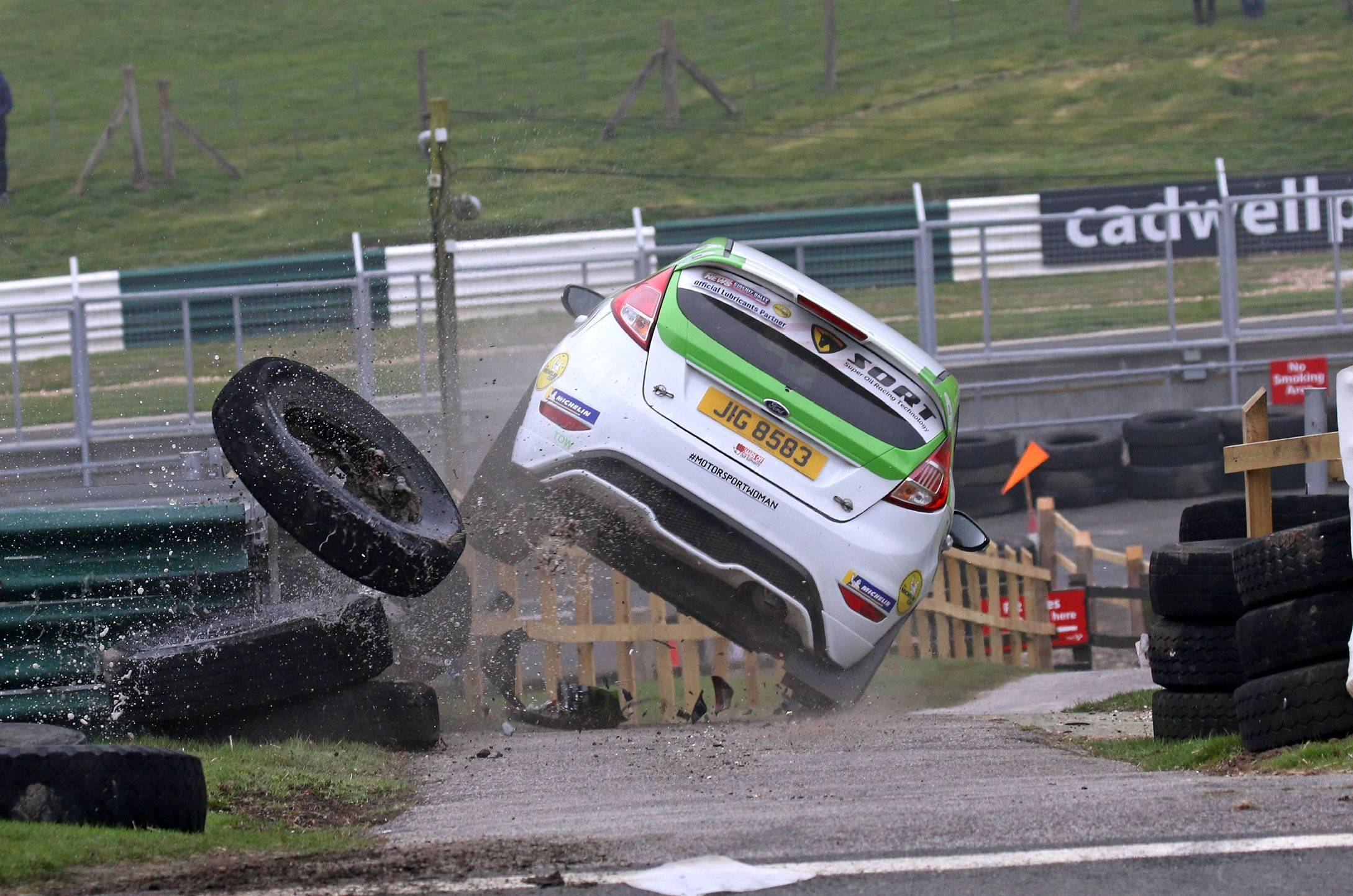 Stage six turned out to be critical. For this stage of the MSN Circuit Rally Championship, the course was reversed and featured a speedy downhill stint straight into a sharp handbrake turn, followed by another handbrake turn onto a long straight not much after. Ashleigh sped through her first lap and looked to be on course for another impressive stage time. However, unfortunately it wasn’t meant to be on this occasion.

“We went round a nine right and through a gate but unfortunately ran a little wide and clipped some tyres and the gate which launched us onto two wheels. Luckily we didn’t roll but damaged the steering in the process so when we landed back down I wasn’t able to steer the car and we went through the fence. Unfortunately, we weren’t able to restart due to damage to the steering and radiator so that was the end of the event for us.”

It was a real shame that Ashleigh’s run ended there, for more than one reason. When you put so much hard work, effort and time into preparing for something like a rally, you want to see it out. You want to complete it and be in with a chance of finishing in one of the top spots. But I was also sad because my time at the rally had drawn to a close – to say I was cold was an understatement, but the excitement and thrill of the day had been completely worth it.

I caught up with Ashleigh after the event to check in, and I asked about how her 2018/2019 Championship had gone. 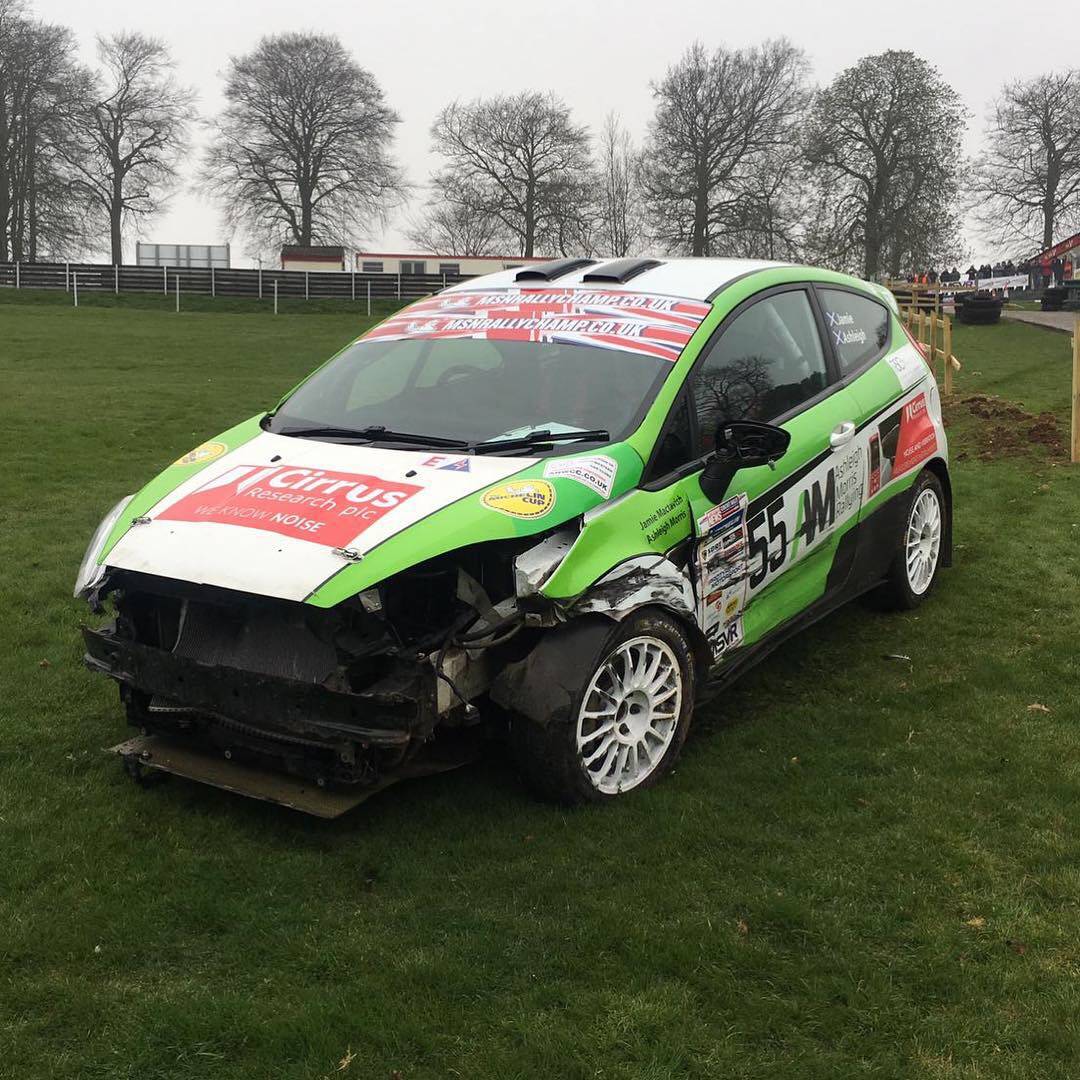 The aftermath of the accident during Stage 6. Thankfully, both Ashleigh and Jamie were unhurt. Photo credit: Ashleigh Morris.

“Overall our 2018/19 season in the Motorsport News Circuit Rally Championship has been mixed. The previous year had been my first year in the Fiesta and we’d had great consistency, finishing every round, but after a year in the car were working on improving our pace. We’d worked hard over the summer, testing the car and doing a few non-championship events to build up confidence and had some good results.

“For the first round of the championship at Oulton Park we had a great run on stage one and were sitting third in class from 14 starters and 40th overall from 93 entries. Unfortunately, we didn’t get any further as the clutch went and we were unable to start stage two, so it wasn’t a great start to the season. We had a solid run at round two at Cadwell Park, finishing fourth in class and were running really well at Knockhill, until we clipped a tyre and had a big incident, which resulted in us rolling three times and damaging the car significantly.

“Thanks to the hard work of TnS Rally, the car was sorted in time for Brands Hatch where we had a steady run, finishing sixth in class from 18 starters. We had bad luck at Snetterton with a broken gearbox mount so had to crawl around two stages and get stage maximums, but were able to get the part welded and finish so we still picked up some championship points.

“We had a good run at Donington, finishing fifth in class, and were delighted to finish second in class at Anglesey, leaving us second in the championship standings heading into the final round. Our accident at Cadwell was an unfortunate way to end the championship but Jamie and I were pleased to finish second in Class B and are looking forward to the awards dinner in June. We’ll be competing in several events over the summer in preparation for next season.”