We decided to take a region and really dig down to local level to see what the situation was like at the grass roots. We opted to look at Yorkshire. It’s our home county so it was a natural starting point.

We instigated a comprehensive round of Freedom of Information requests from every Local Authority in the region. We asked them how many complaints they had, what were the top three complaints and how many of those resulted in court appearances or convictions.

The results came back in a very sporadic fashion. Some within the 3 week rule, other it was closer to three months. But come back they did and the results were not quite what we anticipated. We wanted to make sure it was a fair reflection and so used the census population figures for each Local Authority to work out a figure of complaints per 1,000 population rather than pure numbers. This would have seen the likes of Leeds coming out top as the biggest Local Authority. 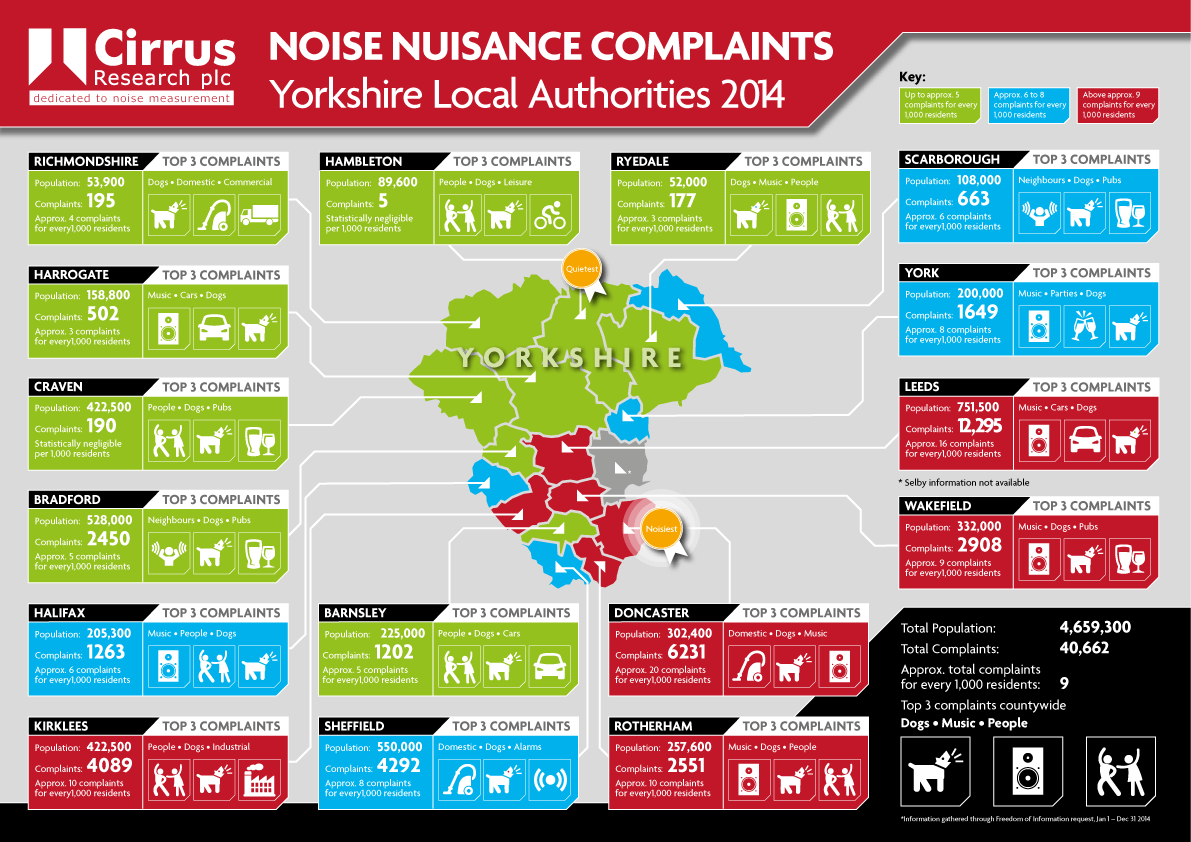 Loudest: Doncaster was firmly ahead for noisy neighbourhoods with 6,231 complaints over the 12 months covering a population of 302,400. The equivalent of just over 20 complaints per 1,000 head.

The vast majority of issues logged related to noisy neighbours shouting or playing loud music in the home. This was followed by barking dogs and then errant car or home alarms being triggered. In the rural areas, bird scarers were also being blamed for disturbing the peace.

When Cirrus asked how many of those thousands of complaints ended up being prosecuted or convicted only 45 cases ended up in court across the whole of Yorkshire. With the total number of complaints coming in at 40,662, it means roughly 0.1% were taken to court.

Doncaster was the most likely place to the prosecuted with 23 ending up in court with over half of the county’s tally. The vast majority were resolved using mediation or warnings, with a handful of cases where officers seized the noise making equipment, such as TVs and stereos.

And the Quietest Place in Yorkshire is…..

Hambleton, North Yorkshire. An almost idyllic 5 complaints in a population of over 89,000 – making it statistically insignificant. A very lovely place to visit though.

We released the figures to the local and regional media and the coverage was extensive, each title honing in on their local statistics to come up with their individual take on the overall league table. Here are just a few examples of the coverage: