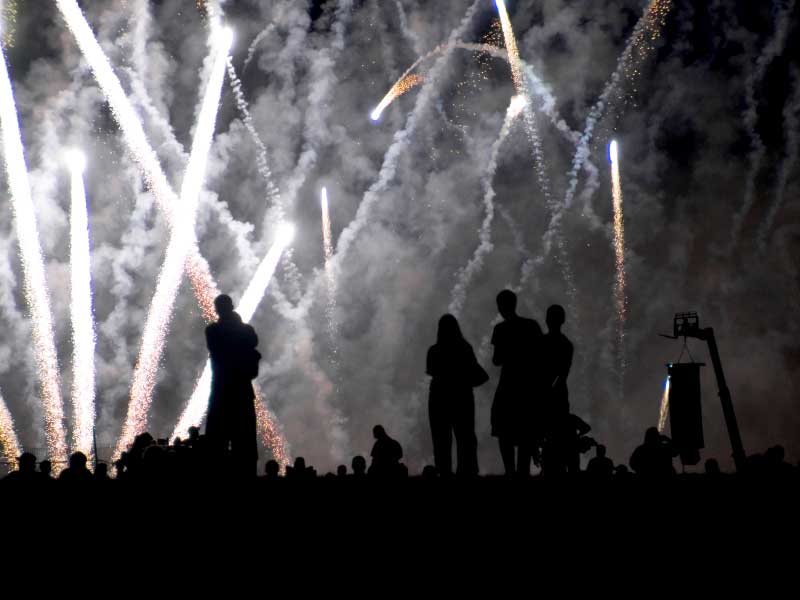 This year, Bonfire Night (5th November for anyone who doesn’t know) fell on a Saturday this year and despite the forecast of rain, myself and my colleagues Gill Cussons, Justin Barker and Nigel Palmer braved the weather with the aim of measuring the noise levels at our local fireworks displays.

We didn’t set out any rules as to where these measurements should be made other than that they should be from within the spectators and should be representative of the noise exposure that people would get.

All of the measurements were made using the Cirrus optimus red and green sound level meters and these were calibrated before use. All of the instruments used standard windshields to reduce the effects of wind on the microphone.

I should also point out that these measurements were taken over a range of different durations and that we didn’t know in what type or size of fireworks would be used.

In total we made 9 measurements with duration of between 52 seconds and 19 minutes with some of these being measurement of an entire display (#5) and some much shorter with just a single rocket (#9).

We aimed to get a representative selection of measurements and to cover a range of different fireworks. Here’s a summary of the overall data.

How loud was it?

As you can see from the table above, the loudest measurement in terms of the C-Weighted Sound Pressure and the LAFmax (Maximum A-Weighted Fast Sound Level) was #1 which was made by Gill over a 5 minute period.

Although none of the measurements had Peak(C) levels above the exposure limits value of 140dB(C), the top three are at or above the upper exposure action value of 135dB(C) Peak.

For this measurement, the overall LAeq of 96.3 is equivalent to an LEP,d of 77.1dB(A). This is not particularly representative as the measurement duration was quite short.

If this noise level continued for an hour, the person exposure would have had a noise exposure that was at the upper exposure action value of 85dB(A) and would be in a situation where noise control measures would have been needed!

Frequency and all that

Much of the excitement from fireworks comes from the audible and physical impact of the explosions as the fireworks detonate. Measurement #1, made by Gill, has the highest LAFmax and LCPeak so I’ve looked at this measurement in a little more detail.

The highest level within this measurement occurred atÂ 20:30:57.25 precisely (or within a 1/16 of a second of that time!) so we can get some very detailed information from the sound level meter at that point.

All of the measurements that we made were made with the optimus sound level meters set to record time history, or noise profile, data at a rate of 1/16th second or 1/100 second with the 1:1 and 1:3 octave band information being stored at 1/16th second or 62.5ms resolution.

We can dig into the detailed data using the NoiseTools software and by looking for the time at which the LCPeak was recording 137.2dB we can get the 1:1 and 1:3 octave band information at that time.

The graph below shows where the highest levels occurred in the measurement and by zooming in with the NoiseTools software, we can see the exact moment that the dB(C) Peak level got to 137.2. 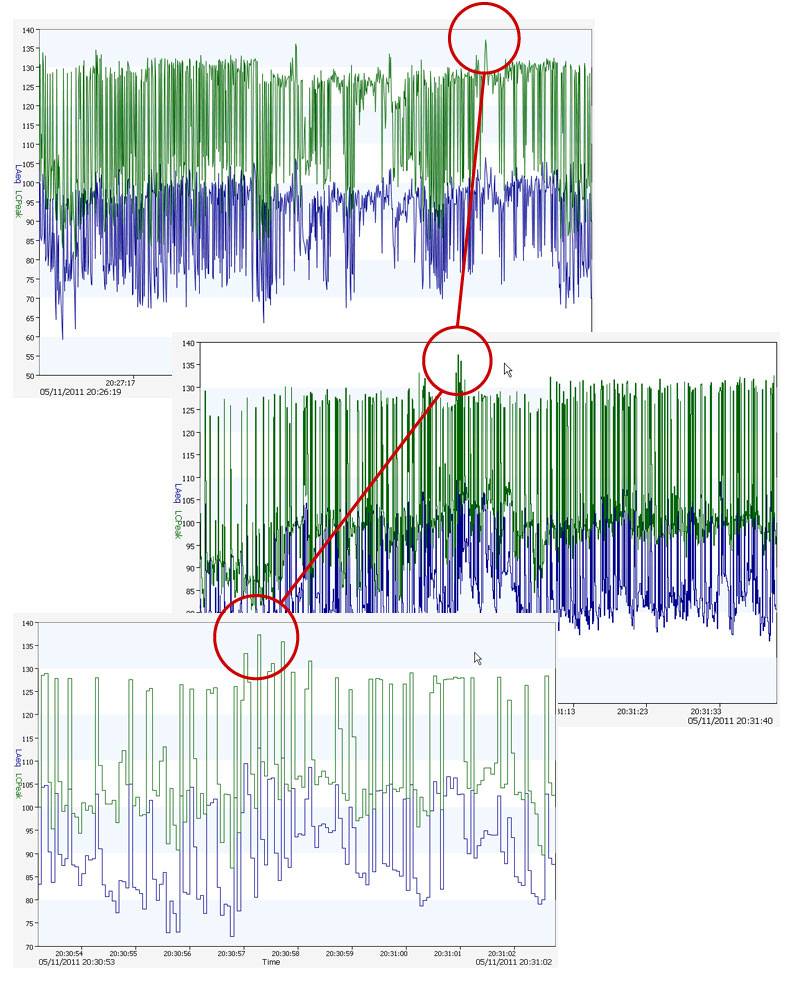 Zoom in on the loudest part of the measurement 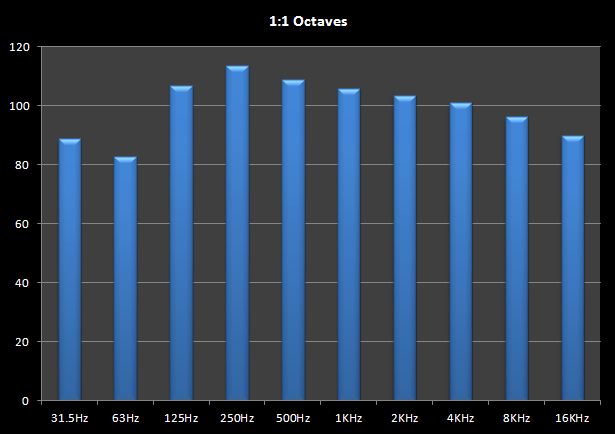 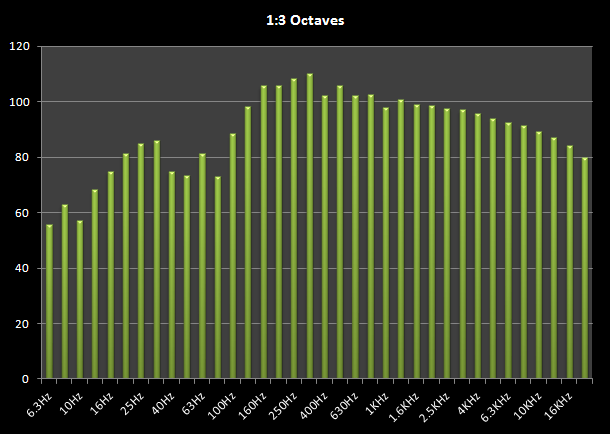 The optimus green sound level meters used by Gill and Justin have the ability to record audio samples during a measurement. These can be triggered either manually or automatically using level and threshold triggers.

In this application, the audio recordings were started manually. The recordings are downloaded into the NoiseTools software program and can be listened to and analysed using the built-in tools.

An example of this analysis is shown below. 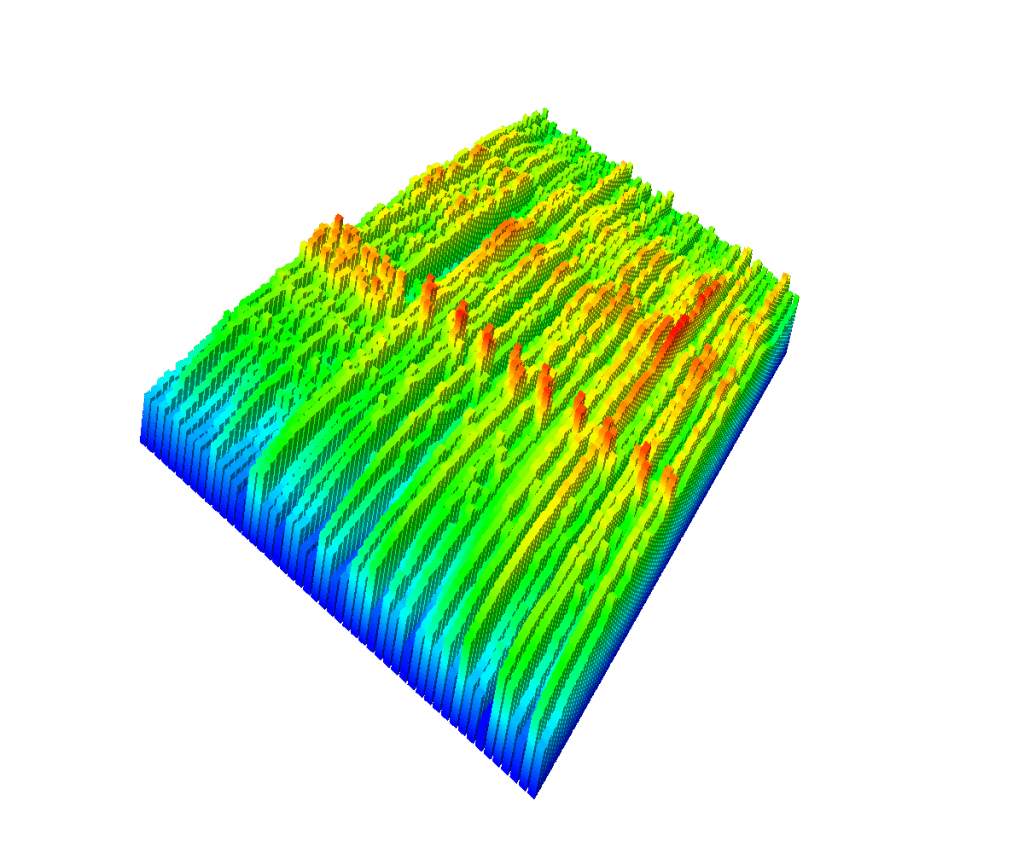 Analysis of an audio recording

All of the measurements, apart from one set, were made with a standard microphone capsule.

The optimus red that I used had an MV:200EH high level microphone which was capable of measuring levels up to 170dB.