As we continues our quest to build up a noise nuisance map of the UK, we recently turned our attention to our fair Capital, London.

With 33 boroughs in Greater London, it was always going to be something of a time-consuming task to get the noise complaints data via Freedom of Information (FOI) requests. However, we were pleasantly surprised by the London Local Authorities efficiencies. The vast majority of data came back in under the 3 week FOI deadline.

As the statistics rolled in, it became clear pretty quickly that the picture being drawn on noise issues for Londoners were going to be somewhat different to those we have already seen in the North West, North East and Yorkshire. For one, we noticed that barking dogs didn’t really featuring very much in the top 3 complaints; perhaps popping up 3 or 4 times, but in other regions, dogs were cited in pretty much every borough as an issue that got neighbours barking mad.

In its place was construction – loud and clear – in both central and suburban locations. Understandable you might think as the Capital continues its quest for more homes, offices and artisan bakeries, and the wealthy dig down to excavate their mega-basements. Yes, to a degree, but you would have thought that the same might have applied to other large cities surveyed such as Leeds and Manchester – not so.

For the first time as well, we had helicopters and buskers given their own categories of complaint in some well-heeled boroughs. In Camden alone, 205 street entertainers were reported for noise nuisance.

But what was the biggest surprise in this leg of our Noise Nuisance Map crusade? It was which boroughs came top of the complaints chart overall 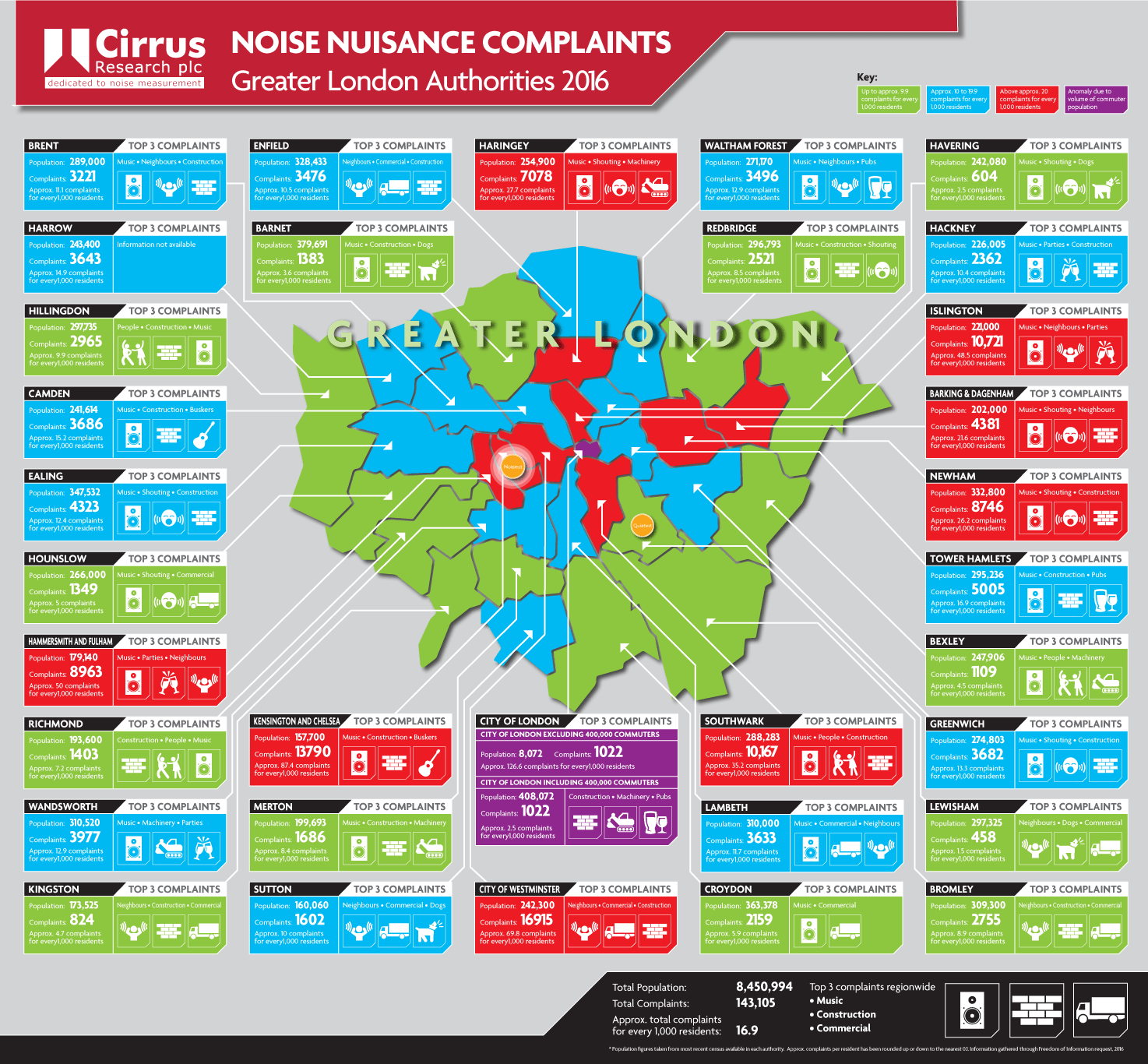 The City of London also provided an anomaly for us. With only 8,072 residents living in the financial district but 1022 complaints, it would have meant a hefty 126.6 complaints per 1,000. However, with around 400,000 commuters coming into offices on a daily basis, that takes the tally down to a more reasonable 2.5/1000 and that made more sense.

We also asked how many of these complaints ended up being prosecuted or convicted. Only 96 cases ended up in court across London. The vast majority were resolved using mediation or warnings. Haringey came top here with 25 prosecutions.

So, it would seem money can buy you a sought-after postcode with all the kudos but it apparently can’t buy you peace and quiet. You will have to try Lewisham for that.

We work with many local authorities and housing associations across the UK. We know what a difficult job they face in terms of investigating and gathering any evidence. What one person thinks is acceptable could drive someone else crazy, so noise enforcement teams have fine line to tread.

People are now much more aware of their rights and more likely to complain rather than grin and bear it. Elderly people are more likely to complain as they spend more time indoors. Also, with more homes now having wooden or laminate floors, as well as wall-mounted TVs, we are seeing more domestic complaints as there is less to insulate the noise within the home.

We have spoken to numerous noise enforcement officers over recent months who currently use our TrojanLITE and Trojan2 Noise Nuisance Recorders as part of their everyday technology arsenal for monitoring noise nuisance. With their help, we have compiled this 6 step guide to help local authorities to resolve noise nuisance complaints.