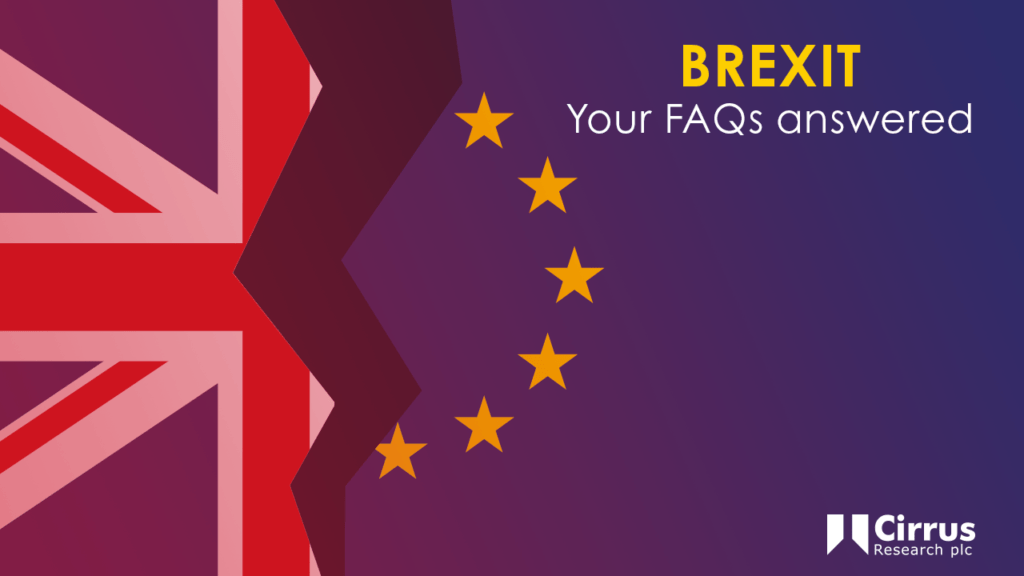 Following a statement from Prime Minister Theresa May on Tuesday and a series of votes on Wednesday, the future direction of the UK’s withdrawal from the European Union has been cast in more uncertainty, which means that businesses like ours are still no closer to learning what our future trading relationship with the EU will be. The current timetable of events and possible outcomes are as outlined below:

March 12th – the UK Parliament will vote on whether to accept the government’s withdrawal agreement. If the government wins the vote, the UK will leave the EU, as scheduled on March 29th, with the negotiated deal in place. If the government loses the vote, another vote will be held on March 13th. The Opposition parties have said they will table an amendment to the withdrawal legislation that would see a second referendum take place. At this stage, it’s not yet clear what the referendum question would be, although it’s widely expected to be a choice between the government’s negotiated deal, and remaining in the European Union.

March 13th – the UK Parliament will vote on whether to leave the European Union without a negotiated deal. If the vote is won, then the UK will leave the EU, as scheduled on March 29th, and will fall back onto World Trade Organisation terms by default. If the vote is lost, another vote will be held on March 14th.

March 14th – the UK Parliament will vote on whether to ask for a short extension to the exit deadline, in order to break the impasse. If the vote is won, the UK Government will request a formal extension: this is not guaranteed to be granted as all EU27 have to agree to any extension. If the vote is lost, the next step is unclear.

As a business that trades internationally, we will continue to keep an eye on political developments to ensure that there is as little impact on our ability to deliver to you as possible. The importance of the next few weeks cannot be understated, as each of the votes that may take place will shape the future trading relationship for businesses in the UK and across the EU. Here is how we see each of the potential outcomes affecting us:

Government’s withdrawal agreement accepted: we will leave the EU on the terms agreed between the EU and the UK, which includes a two-year implementation period during which nothing about our trading arrangements will change. This period will allow for the UK government to negotiate a future trading relationship with the EU. At this stage, it’s impossible to comment on the impact of that relationship on Cirrus Research, as negotiations for it haven’t yet started.

A second EU referendum: if the UK Parliament legislates for a so-called ratification referendum, then the UK will remain a member of the EU for the duration of the campaign, so nothing during that time will change. As the question of this potential referendum hasn’t yet been decided, it’s impossible to comment on the impact it will have on us.

Government’s withdrawal agreement rejected / UK Parliament votes to leave EU without a negotiated deal: as the law currently stands, the UK will leave the European Union on March 29th, whether there is a negotiated deal in place or not. This would mean that the UK will begin trading on WTO terms. Thankfully, the measures we’ve put in place (as outlined below) will mitigate this outcome. We are holding stock in our German office, which means that there won’t be delays to customers in EU countries. However, there will come a point when we have to start exporting product to the EU, which under WTO terms, will necessitate the imposition of import/export tariffs. This may affect prices, although any such changes will be communicated to you directly.

UK Parliament votes to delay Brexit: given the fact that all EU27 nations must agree to any extension of Article 50, it is likely that they will only do so if the extension is to facilitate some sort of democratic process (either a General Election or a referendum). In any case, a delay to Brexit doesn’t provide any more clarity on the UK’s future with the EU – during the extension period, Cirrus will continue to trade as normal, as well as carrying on preparations to mitigate the effects of the UK’s withdrawal from the EU.

Cirrus Research CEO, Daren Wallis, has answered some of the frequently asked questions we’ve received regarding our preparations for the UK’s exit from the European Union. Below, are the answers:

Are any of your products made in the EU and can you still make them?

In terms of where our products are made, over 90% of our products are made in the UK. For the products we do make in the UK, we generally work on a six-month cycle, so we’ve typically got, as work-in-progress, about six months’ worth of products. What we’ve decided to do, is increase that to nine months, which is a process we started about three months ago. So, we’re now ramping up our finished products, ready for March, by about 50%.

For the products we don’t manufacture in the UK, we’ve got a policy where we always hold at least six months’ supply at any given time. We’ve now increased that to 12 months, so that will mitigate any delays in importing products while borders are sorted out and the new systems are put in place.

Are any of your component parts from Mainland Europe?

We’ve freed up a lot of our cash reserves and invested that into component stock. So, not only can we keep standard product coming through, but we’ve got the next batch of product catered for, in terms of raw materials.

We generally do that as a standard practice anyway, because our 15-year warranty dictates we have to have higher-than-expected stock of components at any given time.

Will supply lead times be affected?

In terms of product supply and lead times, not only have we, as I’ve said, increased our finished stock holding by 50%, what we’ve also done, which goes against our standard policy, is we’ve shipped some finished products to our office in Germany. So, they’ll be able to service the European market if we do have problems with supply from the UK. So, we’ll have continuity to our EU partners, by doing that.

Will there be any price increases for your products?

In terms of price increases, they’ll be largely affected by exchange rates, which are completely out of our control. Now we as Cirrus operate in three currencies. We operate in sterling, euros and US dollars, and we buy raw materials and components in a combination of those currencies. But by buying raw materials in advance, any changes that are caused by exchange rate fluctuations, should be minimised in terms of final product pricing, because we’ve bought a lot of components. So, by the time we need to buy again, for most things, in theory, the exchange rate fluctuations should have stabilised, and we’ll know what the new average exchange rate will be.

Do you foresee any negative impact on Cirrus Research?

Will there be any other negative impact on Cirrus Research and therefore you as customers and partners? Hopefully not. We’ve done as much as is practically possible for an SME, but Brexit will affect most exporting manufacturing companies in the UK in some shape or form. But, as you’ve heard, we’ve increased our work-in-progress, we’ve increased our finished stock, and we’ve also pre-bought lots of critical components, which means we can also hold true to our current pricing. And we’ve also shipped finished products to our offices in Germany.

With sales offices in Germany, France and Spain, we are and still remain an EU-based company.

Please be assured that we as Cirrus Research, take our responsibility very seriously. We know that we help protect workers’ hearing and also the standard of living for people by measuring noise and providing noise measurement equipment. We take that responsibility very seriously, so hopefully, the tactics we’ve put in place will mitigate any unforeseen impacts of Brexit, while the “powers-that-be”, figure out what the UK does next in terms of operations with the EU and beyond.