With a population of around 17 million and roughly one-third of that living in Chilean capital of Santiago, traffic noise mapping wouldn’t seem top of the urban research agenda. Not so, last year a report stated that new car sales were up a staggering 27.3% in the country as the economy continues to improve. Santiago is also one of General Motors’ manufacturing bases in South America. That’s why Prof. Jorge Arenas undertook a two-year noise mapping study using equipment from Cirrus Research.

Professor Arenas is a Professor and Director of the Institute of Acoustics of the Austral University of Chile in Valdivia. He has been at the Univ. Austral since 1989.

Austral University of Chile (UACh) is a research university based in Valdivia, with some institutions and careers in Puerto Montt. Founded in 1954, it is one of the eight original Chilean Traditional Universities. It is a nonprofit, self-owned corporation under private law but is significantly state-financed.

CR:171B & CR:1710 Optimus® Green Class 1 Sound Level Meters and CR:515 Acoustic Calibrators with a CK:670 Kit for outdoor measurements. The sound level meters were used with their own microphone and preamplifiers for handheld noise measurements as part of the traffic noise mapping project.

Against this backdrop of economic change, a two-year study got underway across three Chilean cities led by the Univ. Austral. and was supported by the Chilean Ministry of the Environment. Academically titled: “Development and analysis of noise maps of three urban agglomerations using modeling software”, the study concentrated on the Chilean cities of Coquimbo – La Serena, Valdivia, and Temuco – Padre las Casas. It also included recordings and analysis of soundscapes in Valdivia.

The final aim of the project was the development of several strategic traffic noise maps for the three cities.

The project, directed by Dr. Enrique Suarez, compiled measurements of both traffic flow and noise levels. The noise levels were measured in order to verify and calibrate the traffic noise model employed in the study. In addition, long-term (one week) acoustic measurements were carried out to characterise a week cycle in the different types of roads.

To capture these measurements, the Optimus Green Sound Level Meters and their outdoor kits were used; with the meters installed on light posts around the three urban areas – a huge undertaking by the team.

The Optimus Green Sound Level Meter and CK:670 Outdoor Kit being used as part of this traffic noise mapping project

Each city has its own unique urban landscape, population densities and other factors such as influx of tourists to consider. Serena and Valdivia are of a relative size with 198,000 and 158,000 populations respectively, Padre las Casas is much smaller at around 58,000. The first two cities are also established tourist destinations – Serena can see its population double during the summer months and is the fastest growing city in Chile thanks to its prime coastal location.

As an additional activity of the project, a study of the soundscape of Valdivia was also included and this element included binaural recordings and synchronized noise measurements.

This specific type of recordings creates a 3D stereo sound sensation for the listener of being in the actual location. Usually associated with orchestral or musical recordings, this effect is created using a technique known as “dummy head recording”, where a mannequin head is outfitted with a microphone in each ear. Binaural recording is intended for replay using headphones only and doesn’t translate into stereo speakers. Using the Optimus Green Sound Level Meters, five-minute samples were recorded, saved and analysed, adding another layer on to the team’s acoustic understanding of the city. 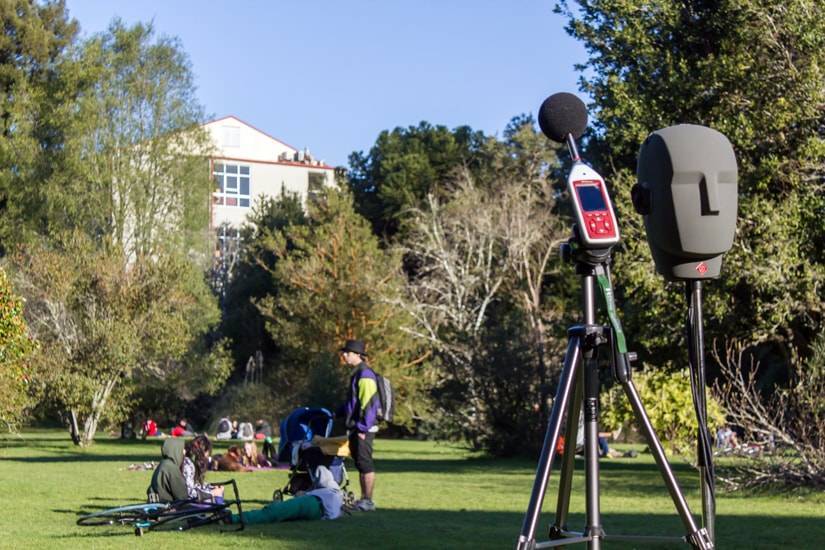 Said Professor Arenas; “We have known Cirrus a long time as a well-established brand in the market. In fact, CONAMA (The National Environmental Commission, now the Ministry of Environment) used to have an analog Cirrus sound level meter that Dr. Suarez used from 1995 until 1999. All the equipment was used in conventional conditions for performing outdoor measurements of traffic noise.”

Dr. Suarez and his team were keen to take advantage of several unique characteristics of the Cirrus equipment including the convenience and flexibility of the software package Noise Tools™.

After the traffic noise mapping study was concluded, the Cirrus kits were then made available to students at the University.

“The equipment is currently available for use in the undergraduate courses and the students prefer this equipment because they are easy to handle and for the convenience of the data handling software,” added Professor Arenas. “The data is very easy to access, handle, and use, in particular because of the software. This particular characteristic of the Cirrus equipment we found much better than other comparable manufacturers of noise measuring and analysis equipment. The acoustic data allowed us to verify and calibrate the noise map modelling (obtaining the sound equivalent levels, Leq) as well as the analysis of soundscapes.”

You can find out more about this project and listen to recordings from the study be visiting http://www.mapa.acusticauach.cl/.

The Optimus Green instruments are ideal for environmental noise measurements and can be combined with the CK:670 and CK:680 outdoor measurement kits to further expand their use.

The overall Leq, Lmax and statistical Ln% values are measured along with a range of noise profiles providing a complete picture of the noise under investigation.

The B & C variants will measure and store RealTime 1:3 octave bands from 6.3Hz to 20kHz throughout each measurement, with the overall value along with a time history stored automatically.

As well as the VoiceTag recording, the Optimus Green instruments provide audio recording during measurements using the Acoustic Fingerprint technology. Recordings can be started either manually or automatically when user defined triggers are activated. Audio recordings can be stored either as Studio 96/32 quality which can be used for later analysis, or as Standard 16/16 quality which can be used for replay and source identification.

The C variants use either the ISO 1996-2:2007 Simplified Method or the Cirrus improved method to highlight tonal noise in 1:3 octave bands.