Noise nuisance is back in the headlines this month with a string of high profile court cases where people have been accused of torturing their neighbours with loud or continuous music.

Now taste in music is subjective but the pain and inconvenience it can cause when played to the extreme isn’t.

Loud noise or music as a form of torture is recognised internationally. The term music torture is sometimes used by critics of the practice of playing loud music incessantly to prisoners or people who are besieged.

The United Nations and the European Court of Human Rights have both banned the use of loud music in interrogations. Even US interrogation experts have acknowledged it causes discomfort but also claim it causes no “long-term effects.” They have been known to deploy thrash metal, heavy rockers Metallica and even tunes from Sesame Street to break the will of detainees.

NO ONE WILL BE SAYING THANK YOU FOR THE MUSIC

The long-term damage of such use will continue to be debated but ask anyone who lives next door to a noisy neighbour and their response will be unanimous.

Blunt fans or not, the girl was found guilty of breaching a noise abatement notice at her council home in Ipswich in March and April, which was initially imposed by Ipswich Borough Council in February after neighbours complained about noise from her flat.

She claimed that it must have been another neighbour playing the music but, as most Council’s now own or have access to pretty sophisticated noise nuisance recording equipment, her pleas fell on deaf ears at the magistrate court.

HOW WE CAN HELP

Cirrus Research’s own Trojan2 Noise Nuisance Recorder is used by dozens of councils and housing associations across the UK for this very type of allegation. It is very hard for any accused to refute the very specific data which can be collated over hours, days or even weeks.

The Trojan2 is easy to use and designed to meet the needs of Environmental Health Officers, Housing Associations or anyone who needs to measure, monitor and record noise nuisance. Watch our video to find our more.

So whilst it may be small immediate comfort for anyone who is suffering at the hands of inconsiderate noisy neighbours, at least Council Officers now have the technology on their side to record, expose and convict those who don’t believe that silence is golden. 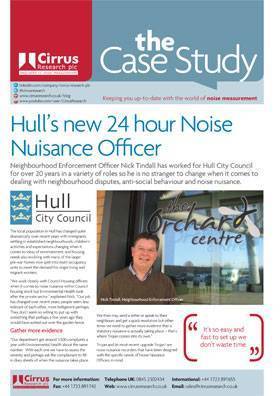