Noise is characterised by the way in which it varies over time. It is usually made up of a wide range of different frequencies. The spread of noise energy across the audible frequency spectrum (about 20Hz-20kHz) is one factor that helps to make it identifiable to the human ear. But how do we determine the nature of the noise using tonal noise analysis?

What Is Tonal Noise? 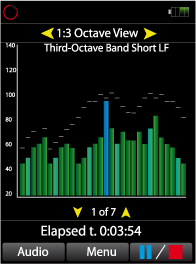 Often the sound energy from a noise source will be spread over a wide band of frequencies. Sometimes a noise source will emit noise that is concentrated in a narrow part of the spectrum or contains a high proportion of energy at a single frequency (a pure tone). This is referred to as tonal noise.

Examples of sources that can cause tonal noise include fans, compressors, motors and transformers. Most have moving parts that rotate or vibrate at a given, audible frequency. Mains electrical power is a common source of tonal noise, for example, in transformers causing them to vibrate at 100Hz.

Tonal noise is generally more noticeable and more annoying than non-tonal noise of the same level. To take this into account, tonal noise can be penalised in assessments of noise impact, usually by adding 5 dB to the measured level.

Whilst tonality can be judged subjectively, it will often be useful to measure it. This can be achieved through octave band, 1/3rd octave band or by narrow band analysis.

BS 7445:1991 Part 2 – Description and measurement of environmental noise, suggests that if the level in one 1/3rd octave band is 5dB or more higher than the level in the two adjacent bands, then an audible tone is likely to be perceived.

One of the problems with the ISO method is that in theory, a pure tone at the exact frequency between 2 bands will have its energy equally spread across them, making their value 3dB lower than the value a band would have had if the tone was at its centre frequency.

The Cirrus improved methods checks if 2 bands are within 3 dB, and if they are both higher than their neighbours by the defined thresholds. The highest of those 2 bands is defined as the tone.

When a tone is detected using the Cirrus improved method, the appropriate band is highlighted on both the A and Z weighted screens.